Enter Timmy Turner: The Average Kid Who No One Understands

Cosmo Julius Cosma is a character from the The Fairly OddParents! His wife is Wanda . Both Cosmo and Wanda were assigned to Timmy Turner  as fairy godparents due to his unhappy life. Timmy was 8 years old at that time.

Cosmo is known for his stupidity and has been responsible for inadvertently causing disasters (examples from various episodes include the violent eruption of Mount Vesuvius on the cities of Herculaneum and Pompeii, the repeated sinking of Atlantis and the destruction of Pluto) since he was born. As explained in "Fairly Oddbaby" Cosmo's ability for destruction is such that when he was born, all fairies were henceforth no longer allowed to have children out of the fear that another potential fairy baby would be as bad as or worse than Cosmo. Although he is very laid back and dim, Cosmo is prone to fits of jealousy and becomes defensive when he sees others flirting with his wife Wanda.

Cosmo is first seen in "Enter Timmy Turner: The Average Kid Who No One Understands", as he is watching Timmy Turner use the computer, before Vicky barges in and tries to attack him, but after seeing Cosmo and Wanda, Cosmo knocks her out, temporarily giving her amnesia. They later meet up with Caillou and go to Accaplucco's and Westwood, before training and participating in the Fairy World War. Afterwards, Cosmo joins the gang on their quest to rescue Perry.

Cosmo has fair skin, green eyes, and green. He also has a gold crown, insect wings, and a gold star-shaped wand with a black handle. His normal attire consists of a white dress shirt with a black tie and black pants with matching shoes. 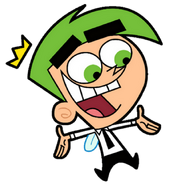 Add a photo to this gallery
Retrieved from "https://school-daze.fandom.com/wiki/Cosmo?oldid=2703"
Community content is available under CC-BY-SA unless otherwise noted.