Cindy is a smart, bossy, prideful, independent, competitive, sarcastic, and stubborn young girl. Her close friend is Libby. She has a dog named Humphrey, who is seen in many episodes, usually accompanying her. She is Jimmy Neutron's female counterpart but in the 2006 episode, "Lady Sings the News", Jimmy and Cindy officially start dating, which was predicted in earlier episodes like "Win Lose and Kaboom!". In "The Tomorrow Boys", Jimmy, Sheen, and Carl traveled to the future, where future Jimmy revealed he and Cindy were married. It is unclear whether this is the true future since the gang changed the past by the end of the episode. In The Jimmy Timmy Power Hour trilogy, Cindy has a relationship with Timmy Turner.

Cindy is first seen in the episode "Enter Jimmy Neutron: Agony and the Brains", where Him/Her, along with Jimmy, Carl, Sheen, and Libby. After meeting up with Caillou and co, they film funny videos together, and later team up to stop Professor Calamitous and Beautiful Gorgeous from flooding the world.

Cindy has fair skin, green eyes, and blonde hair with side-swept bangs. She is seen wearing 4 different outfits in the 2 different programs she appeared in.

In her official debut in the Jimmy Neutron short "New Dog, Old Tricks", she wore a pretty pink button-front, short-sleeved, knee-length dress with a frilly white collar, as well as pink shoes.

In the Jimmy Neutron series and Forever Sophomores, Cindy's hair is in a ponytail and wears a faded green-striped halter top, khaki pants, and dark pink and white converse sneakers.

When she debuted in the disney channel movie, she wears a red tank top with a black skirt. she wears gary leggings and red shoes. 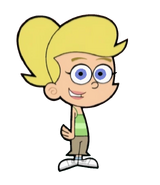 Add a photo to this gallery
Retrieved from "https://school-daze.fandom.com/wiki/Cindy?oldid=7699"
Community content is available under CC-BY-SA unless otherwise noted.