Christopher Cross "Chris" Griffin is one of the main characters from American animated sitcom, Family Guy. He is the son of Lois and Peter Griffin and the brother of Meg and Stewie Griffin. He also lives with a talking dog, Brian Griffin.

Chris is an overweight teenage boy with long, shaggy blonde hair and medium skin. He wears a blue t-shirt, black jeans, white sneakers with red stripes and an orange baseball cap with black on the back. His face looks similar his father's, having the same kind of eyes, nose and chin.

In School Daze, Chris doesn't change his outfits as often as the other Griffin family members do, but when he does, he would wear his t-shirt in a different color(usually white, gray, red, or other colors) with the same jeans and black sneakers. He would usually wear a blue hooded jacket over the shirt, and is sometimes hat-less.

Chris is basically a younger version of Peter, but he is far more optimistic, carefree, suave and kindhearted often going the extra mile to do the right thing. While still truly a moron, various story lines have portrayed Chris as being very intelligent at some subjects, well-known for having a detailed knowledge of films, TV shows, actors and actresses, tropes, techniques to making a film good or bad, etc. This all could suggest that he is a cinephile. He also has an ability to quickly adapt to new cultural surroundings. For example, when the family moved to London in "Patriot Games", Chris was the only member of the family who was able to quickly learn and speak cockney English. Despite this factor, he can be viewed as naive to the point of blamelessness and having a tendency to get away with things. However, when Peter and Lois were having a fist fight, Chris cheered for Peter telling him to "kick her ass!"; earlier in the episode, after Chris breaks something and Lois tells Peter to punish him, Peter tells him to "punish himself" and subsequently spanks himself. Also, in Stewie Griffin: The Untold Story, when the children watch Lois and Peter are trying to make out, Chris mistakes it for a fight and says, "Dude, I don't know what they're fighting about, but I think Dad's winning. Go Dad!" In the episode "Trading Places", after Chris accidentally damages Peter's dirt bike, Peter "punishes" him by making him smoke. Like Meg, Chris is a bullied and unpopular student at James Woods Regional High School, though his misfortune is to a somewhat lesser extant than to her sister. Despite this though, Chris has a more lonely social life, having no known permanent friends (aside from a nerdy Jewish boy named Neil Goldman). In some episodes however, he has shown the unusual ability to move between different cliques and social groups without showing any prejudice of their activities, although these occasions have only lasted episodewise. Although normally mild-mannered, Chris cries whenever he is upset, and has uncontrollable bursts of rage, during which he destroys nearby objects and yells at everyone around him. Overall, Chris is the more well-treated of the Griffin children, despite his lack of both intelligence and high school popularity. 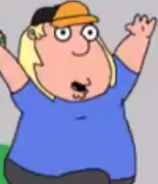 Add a photo to this gallery
Retrieved from "https://school-daze.fandom.com/wiki/Chris_Griffin?oldid=4565"
Community content is available under CC-BY-SA unless otherwise noted.