Carl is a bespectacled dim-witted boy and one of Jimmy's best friends. Carl and his parents have numerous allergies, at times even to things that are incapable of triggering allergic reactions. He passionately loves llamas, and his passion for them is often used as a running gag throughout the series. He is also a bit cowardly and developed a crush on Jimmy's mom. His extreme obsession for the llama originated when his parents expanded their cable lineup and he became devoted to a show called Llama Boy The Super Hero. Since his obsession began he has gone to great lengths to express his love for them, going as far as to join a fan club called, The Llama Love Society.

Carl is first seen in the episode "Enter Jimmy Neutron: Agony and the Brains", where Him/Her, along with Jimmy, Sheen, Cindy, and Libby. After meeting up with Caillou and co, they film funny videos together, and later team up to stop Professor Calamitous and Beautiful Gorgeous from flooding the world.

Carl has fair skin, black eyes, and red hair. He also sports brown glasses. His Normal attire consists of a red and orange striped polo shirt, green pants(which had orange suspenders in the movie, and brown loafers. In "Enter Jimmy Neutron: Agony and the Brains", he wears an orange suit with a white shirt, red tie, and his brown loafers. 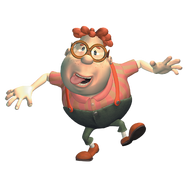 Add a photo to this gallery
Retrieved from "https://school-daze.fandom.com/wiki/Carl?oldid=7720"
Community content is available under CC-BY-SA unless otherwise noted.