High School Begins
Bryce Racer, is a main character in the show School Daze. He is a classmate of Tom, Trent, Willy, and Caillou in Biology. He used to be in their Essentials to Literacy class, until he switched classes in “School Daze 2: A Jolly Good Battle”. In "The Return of Bryce", he returns to Ms. Robinson's class. He would often say inappropriate things that rarely get him into trouble. He’s been appearing in almost every episode since his debut in the Season 18 episode “High School Begins”.

Bryce has a similar personality as Rick. He’s the bad boy of the group like Rick, but he says more obscene things than him. He rarely does his classwork, which upsets his teachers. Also, Bryce really hates Rick. He would always insult him along with Evan about his personal problems. He also finds Willy annoying. Willy would always ask  Bryce stupid questions just to annoy him. And because of this, Bryce has given him death threats and told him to shut up on several occasions. But little does he know, Willy always calls him “Brian Griffin” (the talking white lab from Family Guy) behind his back. And every time he did, Trent would slap him in the face. When Bryce found out, he didn’t really care. He also has the courage to show his teachers that he has no interest in what they are trying to teach him. That got him kicked out of Ms. Robinson’s classroom in one episode. In Seasons 22-23, he mocked Willy for having autism. That got him in trouble with Ms. Aarestad in “FE013: Hola Meowth, Soy Dora”.

Bryce’s outfits vary throughout the School Daze series, but he wears 7 main outfits. He has tan skin, brown eyes, and black hair. He would sometimes wear a red and black beanie or a camo-patterned cap on his head. His usual attire consists of a hoodie with a t-shirt underneath, along with jeans or cargo pants.

In the 18th Season, he wore a gray hoodie with a white undershirt, light gray cargo pants, and red sneakers.

Around Season 19, he wore a different outfit, consisting of the same gray hoodie with a red violet undershirt, green cargo pants, and brown boots.

When Season 22 premiered, he got a new outfit, consisting of a brown hoodie with camouflage patterns on it, black undershirt, gray cargo pants, and the same boots. He also wears this in the first 3 seasons of Forever Sophomores.

Bryce's outfit during the Animas Extravaganza series consists of a black hoodie with a camo-patterned Under-Armour logo on it, a red short-sleeved undershirt, blue jeans, and the same brown boots from his last 2 outfits.

In his last couple appearances in Animas Extravaganza and a majority of Season 32, he wears a brown hoodie with a white camo pattern and orange laces, a navy blue short-sleeved undershirt, khaki pants, and the same boots.

Near the end of Season 32, Bryce wears a military green hooded jacket with gray camo-patterned sleeves and orange accents. The jacket was worn with the hood on and the sleeves rolled up, just like how he wore his original gray jacket. He also wears a blue short-sleeved undershirt, gray jeans, and his brown boots.

Starting with the 35th Season, Bryce's attire receives a minor change. While keeping his green hooded jacket and brown boots, the colors of Bryce's undershirt and jeans are reversed. His short-sleeved undershirt is now gray, and his jeans are now blue.

When the class photo was taken prior to the Forever Sophomores finale, He wore a similar outfit to his current one, but his short-sleeved undershirt is black with a skull on it.

In Season 1 of the Advanced Education series, Bryce discards his jacket and is seen wearing a navy blue t-shirt, dark green camo cargo pants, and his usual brown boots. He sometimes wears this outfit in different colors. When outside of the school, he wears his green hooded jacket and camo-patterned cap with this outfit. In the promotional artwork and the first intro, he wore his green jacket over an orange t-shirt, black jeans, and the same brown boots.

In Season 2 of the Advanced Education series, Bryce can be seen wearing his trademark green hooded jacket with the same red t-shirt and blue jeans from Animas Extravaganza. On his feet, he still wears his brown boots. This outfit is often seen in different colors. In the Halloween special, Bryce wore a green military jacket with a brown camouflage pattern on it, a black undershirt, dark blue jeans, and his brown boots.

In Season 3 of the Advanced Education series, Bryce wears the same green camo jacket from the Halloween Special with his old brown hoodie and green cargo pants. He also wears a blue shirt underneath the hoodie, as well as his trademark brown boots.

In Season 4-6 of the Advanced Education series, Bryce wears a light gray hoodie with the Call of Duty WWII logo on it. Like 2 of his old jackets, he wears this one with the hood on and the sleeves rolled up. he also wears a black undershirt, his blue jeans, and brown boots. This outfit can be seen in different colors. Near the end of Advanced Education, he replaces his brown boots with a new pair of dark blue Adidas sneakers.

In Senior Year, Bryce’s main outfit consists of a dark green t-shirt with a forest pattern on it, blue jeans, dark blue Adidas sneakers, and his green jacket from Forever Sophomores, which is replaced by a new jacket with red on the top and navy blue on the bottom starting with Late-Season 50. He would also be seen wearing a hoodie(either a pullover or with a zipper), with a t-shirt underneath it, as well as either jeans, khakis, or cargo pants for legwear. On his feet, he will either wear his old boots or new sneakers. His clothing is normally seen in the colors green, brown, gray, blue, red, white, orange, or black. 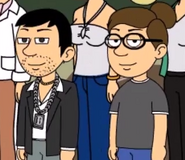 Bryce standing next to Janet