The Legend of the Big Red Chicken

Wounds
Boots is a 5 (4 for the first 12 episodes) year old furry monkey and Dora's best friend. He's like a worshipful younger brother. Sweet and loving, he likes to hold Dora's hand. Unlike Dora, Boots sometimes makes wrong choices and gets discouraged. When he is feeling down, he always bounces back quickly with one of his flips. No one can make Dora laugh the way Boots can. He's the best friend you always wanted.

Boots is athletic and energetic. He performs a series of acrobatic flips, somersaults, and cartwheels, along the way to their destination. His light weight also makes him easy to carry, even for Dora. Without guidance from Dora, the viewer, or another character, Boots is quick to take his own, often dangerous or dead-ended, route. Dora often acts as the voice of reason. Boots also "loves" many things. In one episode, he would say many times "I love riddles. Call me 'Mr. Riddles'" or "I love nuts, I love chocolate, I love my ball, and I love, love, love...". Most importantly, however, Boots loves Dora and Dora loves him back, as both expressed verbally and physically in numerous episodes. His devotion and love always has Boots more than willing to drop whatever he's doing at the moment and make space in his random mental schedule for Dora. For her sake, he has even engaged in his own single adventures assisted by the viewers. Boots' vocabulary is limited but steadily increasing. Dora teaches him Spanish through memorable songs and phrases. Boots was voiced by Harrison Chad in the original English version and then, from season five and six, by Regan Mizrahi; and for season seven and eight, by Koda Gursoy. Boots is a character who Dora met one day, and is her best friend. He is friendly and enthusiastic and usually, wears his beloved red boots, hence his name. He is light purple with a yellow stomach and yellow tipped tail. His parents look similar, with variations in eyes, height, clothing, and wings. Boots is present with Dora on most of her adventures, and he helps Dora to solve clues and puzzles. He also loves baseball and is on a team with Dora as shown in one episode. He loves to ride Rojo the fire truck. He is disliked by many characters, and because of this, Caillou would often abuse him physically & emotionally. However, this changes by the end of Forever Sophomores. In newer episodes, he is shown to be in a homosexual relationship with Tico.

Boots is mostly a gray-purple color. He has a yellow stomach and a pair of white eyes with black pupils. He has 3 hairs sticking out of his head, and his face, hands, and feet are colored pink. He is shown wearing a pair of red boots. He is very short and goes up to Dora’s chest, but is now down to her legs since Dora got older. His appearance stayed the same throughout the franchise. 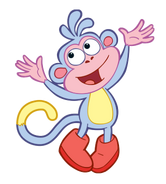 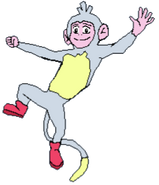 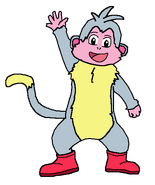