Pokemon: I Choose You!
Pikachu is the main protagonist of the Pokemon franchise. He is an Electric-type Pokémon owned by Ash. He is the first Pokémon Ash ever had.

Pikachu is a small, chubby, and incredibly cute mouse-like Pokémon. He is almost completely covered by yellow fur. He has long yellow ears that are tipped with black. Pikachu's back has two brown stripes, and his large tail is notable for being shaped like a lightning bolt. On his cheeks are two circle-shaped red pouches used for storing electricity. They turn yellow and spark with electricity when he's about to use an Electric attack, such as Thunderbolt. He has also been known to generate small surges of electrical energy in anger or for protection, like in the anime.

In the 2nd Dimension, Pikachu looked more like a cyborg, as he had gained robot attachments.

Pikachu is Ash's best friend. Pikachu has always been there for Ash and also takes a leadership position for the team. He is curious, smart and friendly, but shares Ash's fondness for battling. One of his most noticeable features is his determination and unwillingness to give up whenever a situation gets tough. He is shown to be responsible with younger Pokémon, particularly Misty's Togepi, who he is often forced to shepherd out of danger by putting himself in it. Although stubborn at times, he obeys Ash's commands in battle and rarely leaves his side. He is also a constant target for Team Rocket. They try to capture him, but on the few occasions that they do, their plans are always thwarted by Ash and his friends. Even after getting out of their traps, avoiding capture, or that he wasn't part of their schemes, Pikachu also thwarts his enemies by attacking or getting rid of them using his Electric-type attacks, like his signature attack, Thunderbolt. He is very swift in battles as well. He can also imitate some Pokémon by making their face shapes.

Like his master, Pikachu shares Ash's love for science and technology; even if he cannot understand most of it.

In some episodes, Pikachu has a strong rivalry with other trainers' Raichu which is Pikachu's evolved form, who is much stronger than the latter and also responsible for injuring Pikachu in every first battle with the exception of both Volkner and Tierno's Raichu who appears as a calm, serious and a friendly Pokémon. In Sun and Moon series during the pancake race, it showed Pikachu wanted to defeat an Alolan Raichu. The prime example is when Lt. Surge's Raichu manage to overpower Pikachu with its abilities and also injures it in the process. This also carries to Sho's Raichu who also overpowers all of Pikachu's abilities such as his Iron Tail and Volt Tackle. Despite their overpowered prowess, Pikachu is able to withstand against them by using its speed and its tactics in battling in order to defeat them.

During the time when Pikachu was injured in each of the first battles against the trainer's Raichu, he was given the chance to evolve into a Raichu using a Thunder Stone but Pikachu often refuses. This trait is later shared by his best friend, Dawn's Piplup who also given the chance to evolve, but also refuses as he has an Everstone to prevent it.

Pikachu meets Bart and Brian and travels with Ash and co. in Springfield

Pikachu electrocutes Rigby at the end of "Mordeby and Rigbecai".

Pikachu is kidnapped and turned evil by a young boy, who was tricked by Team Rocket. Ash won him back after beating the kid at a game of Line Up 4.

He watches the Regular Show finale with Ash and co.

After being kidnapped by Team Rocket, he falls out of the balloon and lands on the Connelly's property. Tom and co. take care of him until Ash, Misty, and Brock show up. After being rescued, Pikachu goes on a lot of adventures with Ash and co. in Franklin and Roria before heading home. During this time, he forms a gay relationship with Meowth.

Pikachu returns to Franklin with Ash and co. and Together, they go to Boston and New York City with Tom and the Gang. Eventually, they head home.

Pikachu, Ash, and Gary spend the weekend at Gammy's, where they reunite with Tom and co. During the weekend, Pikachu constantly flirts with Meowth, much to his dismay. They eventally part ways and return home to Alola.

Ash and co. greet Dawn as she returns to Pallet Town to attend a Thanksgiving dinner planned by Ash's Mom. However, those plans change as Dawn finding a picture of Ash and Alex. The gang decides to go back to Franklin to see Alex. When they got to Franklin, Tom and the gang introduces themselves to Dawn. After spending a whole week together, they end up going to Thanksgiving dinner with the Connellys. After Thanksgiving, Ash and his friends decide to spend all of December in Franklin with the Connellys so they can go to Cape Cod during Winter Break. During the whole series, Ash and co. go on many crazy adventures while meeting Team 7 and the Straw Hats and celebrating the Holidays before parting ways.

School Daze 4: Road to the Omniverse[]

Pikachu is training with Ash, when suddenly, he is approached by a group of zombies. They is then rescued by Luffy and Naruto, who take them to Ben 10,000's time machine. They rescue Alex as well, along with Mordecai, Rigby, Dora, and Diego. They are then taken to the park that Mordecai and Rigby used to work at, and the duo is reunited with their old co-workers. They spend the week hanging out at the park while rescuing some friends along the way. Eventually, they all take down Eon, and part ways.

Pikachu is hanging out in Daisy’s room, when he hears that they have to go to the movies, much to his dismay. When they get to the movies, the place is suddenly overrun by Zombiens. Dan and Susan are bitten, and turned into Zombiens, while the rest of the gang is struggling to find a way out. Pikachu is later captured by Team Rocket, Ash has a choice to either be there with Gary when Daisy turns, or go after Team Rocket. If he stays with Gary, the two say their goodbyes to Daisy before she turns. Ash then leaves to go after Team Rocket, only to learn that Pikachu saved himself, and is really mad at Ash for abandoning him, though he is shown to have gotten over it afterwards. If he chooses to go after Team Rocket, Gary will be upset with Ash. Then, Ash will have to fight Jessie and James himself in order to find out where Meowth is hiding Pikachu. After finding and defeating Meowth, Ash is reunited with Pikachu. The two are then approached by Frederick Jones, who tells them to come with him to train. After about a week or two of training, Pikachu and Ash, along with Ben, Luffy, and Naruto head down to the park and take down the Country Club. He has been going on adventures in Franklin with Ash and co. ever since. After curing the Zombien virus and spending the summer with the Connellys, Pikachu, along with the rest of the heroes, departs from Franklin and heads home.

In the Senior Year series, Pikachu would join Ash's occasional chats with Tom and co. on Skype. He was seen doing this in the following episodes:

He also made a flashback appearance in "Maleficent: The Enemy Within".

Pikachu made his first physical appearance in the Season 50 episode "Let the Games Begin!", where He attends Tom and the gang's Basketball Jamboree as a surprise for Alex planned by Mordecai & Rigby. Afterwards, they go out to eat and look at a few stores, only to realize that Chopper had gone missing. They later learn that Team Rocket had once again teamed up with the Larssons and kidnapped him. An episode later, in "Deernapped!", Pikachu gets kidnapped himself, but later on, Daisy breaks him and Chopper out and returns the them to the heroes, and then they send Team Rocket blasting off before parting ways.

In Season 51, Pikachu and Ash stayed at Gary's home shortly after Thanksgiving. They joined the Oak family on a trip to the Thrift Store, where they met up with May & Max, who were waiting for a bus to Fredford. After missing said bus, Ash allows them to stay at Gary's until the next day. They then went to the grocery store, had dinner, and play games together before going to sleep. The Next Day, they learn that Team Rocket had captured Pikachu yet again, and went after them by jumping on their balloon. When they try to rescue Pikachu, they learn that he became paralyzed as a result of a setitive given to him by Meowth. They then jumped off the balloon after a blizzard occurred, and landed in a lake. They took him to Tom's house, where they healed Pikachu's paralysis, with help from Professor Oak. Since then, Ash has been staying with the Connellys, while May & Max stayed with Bonnie & Mason. And together, they went on many adventures and spent the holidays together before parting ways.

In Season 53, Pikachu's 2nd Dimension Counterpart is part of the Resistance, and helps Phineas, Ferb, Dipper, and Mabel break Caillou and Perry out of prison. Pikachu-2 is also present when Doof-2 was arrested for his crimes.

Pikachu made another flashback appearance in "Injustice in Colorado".

In Season 56, With the Coronavirus at its worst, Pallet Town is now in quarantine. Pikachu spent most of the pandemic at home with Ash and Delia before joining Ash, Luffy, Naruto, and Chopper as they visit the Connellys for a week before proceeding with their mission to rescue Alex and his group from the alternate future, while meeting up with old friends, fighting off Team Rocket and Emit Relevart, and traveling by train to Svalbard along the way.

They are each other's best friend, even though they had a rough start at first, they've been at each other's side no matter what. They would protect each other from trouble and would stand up for each other. A lot of people see that they're perfect partners. Pikachu has helped Ash break free from someone's control a couple times in there adventures and Ash has helped Pikachu do the same thing plenty of times showing how strong their friendship is. 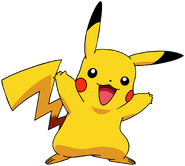 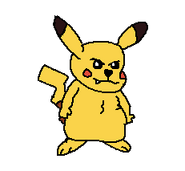