Arvo-Javier Mulana, better known as AJ, is a minor character and an antagonist who appears in the High School Years and Advanced Education series. He is a student at Fredford High School who enjoys picking on Tom and co. He debuted in "Simpsons Guy 4", and serves as the primary antagonist of the episodes "Too Much Homework XIII", "Conflicts with Grading", and "A Vengeful Bully! Violence is Never the Answer!".

AJ is a tall and slender African-American boy with dark skin, brown eyes, and short black hair. In the High School Years series, he sported glasses and wore a light blue hoodie with a red undershirt, gray sweatpants, and dark gray and blue sneakers. He wore a similar outfit in Forever Sophomores, but his hoodie was red, and he discarded his glasses. In Advanced Education and Senior Year, AJ wears a darker blue hoodie, an undershirt of varying colors, blue jeans, and gray sneakers with blue and orange accents. Sometimes, he would discard the hoodie and instead wear a red, green, or blue t-shirt with his jeans(sometimes replaced by dark sweatpants) and sneakers. Starting with Season 51, his sneakers are replaced by a pair of boots that are identical to the ones Mason currently wears.

AJ first appeared in "Simpsons Guy 4", when he approaches Willy and asks why he walks on his tippy-toes, to which he responds with "Because you Touch Yourself at Night!". This occurred over and over again for the next four seasons of High School Years, making it a running gag. However, AJ got sick of that answer, and went as far as to bother Tom and co. about it at lunch as they are working on homework. In a fit of rage, Trent stabs him in the hand with a pencil, starting a whole wave of drama. So starting with "The High Notes of a Musical Reunion", AJ begins to antagonize the gang by following them as they are walking to class, and continued to do so until Season 23. In the episode "Conflicts with Grading", Trent finally told him why Willy walks on his toes, and threatens him not to bother them again, but he still continued to for the rest of the year. The gang's relationship with AJ became neutral in the Forever Sophomores series and the early seasons of Advanced Education, making them close friends. But that came to an end after Tom and the gang, along with Michael, put him in a YouTube video at his request, and unintentionally mocked his heritage in it. This causes Robert and Bob to tease him at lunch. He was angry about the video, and began to antagonize the gang for it. It started with simple scolding, but in Season 44, he began to use more physical methods to express his anger, such as coughing on Willy. The time where his antagonistic behavior really came back was in the episode "A Vengeful Bully! Violence is Never the Answer". In that episode, he swiped the gang's Chromebook at lunch while they were working on a project for US History. Trent tried to yell at him to get over it, but AJ argued back, saying that they didn't have his permission to put him in the video, which he was clearly lying about. He continuously touched the Chromebook, causing Trent to attack him physically by hitting him on the arms and chest, pushing him, and even punching him in the face. It was at that moment where AJ once again became one of the gang's greatest enemies, and they have been avoiding him ever since. That was, until near the end of the first season of the Senior Year series, where he sat at the gang's table without warning. It started out with awkward silence and small talk, and then Willy apologized for the video, putting them on good terms once again. Despite this, Trent still doesn't trust him. 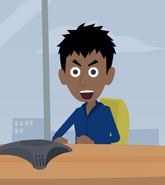 Add a photo to this gallery
Retrieved from "https://school-daze.fandom.com/wiki/Arvo-Javier?oldid=7450"
Community content is available under CC-BY-SA unless otherwise noted.