Board of the Arts
Angelica Charlotte Pickles is a main antagonist in Rugrats and All Grown Up!. She is a spoiled brat and the cousin of Tommy and Dil Pickles, as well as the only daughter of Drew and Charlotte. She debuts in the episode "Board of the Arts".

Angelica Pickles may not be as bratty as she was when she was 3 years old, but she still has a way of getting her cousins Tommy and Dil to carry out their orders. She also has a great influence on her preschool friend, Harold, who is more than eager to do what she asks. Of course, Susie Carmichael is not so easy to influence, and is often a thorn in Angelica's side when it comes to her plans to manipulate situations in her favor. However, Angelica has softened a bit. She is not above asking even Susie advice in the field of social climbing, and has even tried to be a mentor to a young child (to promote their own interests, of course!) Angelica still has delusions of greatness when it comes to to her talent as a singer, and she manages to find ways to torture her peers with her out-of-tune ballads.

When she first appeared in "Board of the Arts", Angelica, along with the rest of the Rugrats, played some board games online with Caillou and his team. Throughout most of the "Karaoke Conflict Arc", she is mostly seen rehearsing with Stewie, after him and Brian ended their friendship. She even insulted Brian a few times, like when she scolded him for breaking her phone after he used it to hit Stewie, and for accidentally sending her to hell with a replacement phone built by Phineas. By the end of the Arc, Angelica begins to help Caillou's Team in their mission to rescue Perry.

Angelica has fair skin, brown eyes, and blonde hair. She wears several outfits throughout the 3 different programs she appeared in.

In Rugrats, Angelica wore her hair in bangs and pigtails, which were held up by purple bows. Her normal attire consists of a sleeveless knee-length purple dress, a reddish-orange long-sleeved blouse with flared cuffs, blue tights with green polka-dots, orange socks, and purple sneakers with white soles.

In Rugrats Go Wild! Angelica wears a blue-gray short-sleeved, knee-length dress with a navy blue scarf, and white shoes with black soles. She also has pink bows in her hair. Later on, she wears red and purple flowers in her hair, a pink one over her shirt, a green hula skirt, and green and pink ankle-bracelets with this outfit.

In All Growed Up, Angelica has longer hair, but keeps her bangs. She wore a purple raglan shirt with lavender sleeves, purple and blue bracelets on her right wrist, and a pink watch on her left wrist, a dark blue knee-length skirt with a green trim and polka-dot patter, a blue ankle bracelet, and purple slides with orange straps.

In All Grown Up, Angelica's outfits change often, but she is mostly seen in 3 different outfits.

In Forever Sophomores, Angelica wears an outfit, which combines all of her past outfits together. She wears a blue cap with green polka-dots, which is similar to her leggings from Rugrats, a purple tank-top over a red short-sleeved, midriff-exposing turtleneck sweater(resembling her Rugrats top), pink bracelets and watch, the belt from the first season of All Grown Up!, blue jeans with ripped knees, and purple flats. 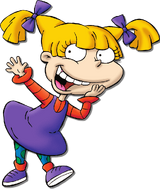 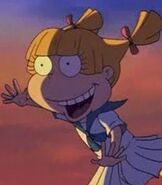 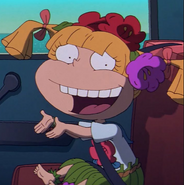 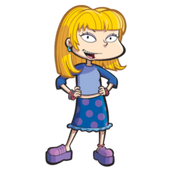 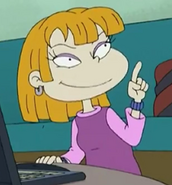 Add a photo to this gallery
Retrieved from "https://school-daze.fandom.com/wiki/Angelica?oldid=2876"
Community content is available under CC-BY-SA unless otherwise noted.