Charlie Bright (as a child; in Toy Story 3)

Andrew "Andy" Davis Jr. is one of the main characters in the Disney/Pixar Toy Story movies, as well as a main character in the Advanced Education series. He is the former owner of Woody, Buzz, and the rest of the toys before handing them down to Bonnie. In School Daze, he debuted in "Sim Story".

Andy is an imaginative boy who lives with his mother and sister Molly; his father is never seen in the films and supplementary materials indicate that he has passed away prior to the events of the first movie. He is 6 years old in his debut and is the owner of Woody, Buzz Lightyear, and the other toys, which he treats with a large amount of love, and he would get upset whenever he lost them. In the All Grown Up series, he acts as a father figure towards Bonnie, Mason, and his toys, and would act strict when needed. He is also not the brightest, as he would occasionally make dumb decisions, such as going to work shirtless in "Sim Story".

Andy is a tall and slender young man with fair skin, blue eyes, and brown hair. He also sports freckles. In the first two movies, he wore a red cowboy hat, but stopped wearing it prior to Toy Story 3. In the All Grown Up series, he starts wearing glasses and sports a goatee. He later discards the glasses and shaves off the goatee in Forever Sophomores and Advanced Education.

At the beginning of the movie, he wears a green t-shirt with a cowboy playing a guitar on the top right corner, blue shorts, white socks, and white sneakers with blue laces. When he goes to Pizza Planet, he wears a purple polo shirt, but keeps his blue shorts and sneakers. On moving day, he wears a light blue t-shirt with light brown shorts and his sneakers. However, He wears his original outfit in a shot where he sadly leaves his old room holding his hat and Buzz's box, but this could either be an error, or he slept in those clothes.

In “A New Beginning”, Andy wears a white Mixed Martial Arts t-shirt, red shorts with black and white accents, black ankle-length socks, and black and red high-top sneakers with gray soles. He also briefly wore a black Bruins t-shirt before switching back to his white one.

Life with the Davises Edit

In the Life with the Davises series, Andy wears several outfits. His primary outfit consists of a brown jacket, a white short-sleeved undershirt, blue jeans, and white sneakers. In December, he wore green casts with black leather shoes. His christmas outfit consists of a red collared sweater with white and gray stripes, an green and black striped undershirt(sometimes red or blue), and gray or dark blue sweatpants. His secondary outfit consists of a blue t-shirt, black and gray checkered cargo shorts, and black sneakers. During his trip to Key West, he wears a white polo shirt and khaki shorts. He also wears multi-colored Silly-Bandz on his right wrist. He would sometimes wear a red shirt with blue shorts or a gray shirt and shorts. His outfit for 2010 consists of a dark blue Toy Story t-shirt, black shorts, and the same sneakers. He sometimes wears his trademark green t-shirt and blue shorts from Toy Story 1.

In Toy Story: The Series, Andy's outfits changed frequently, but his most prominent outfit in this series is a red and gray striped polo shirt, black pants with white vertical stripes, and black sneakers. This outfit is often seen in different colors. In cold weather, he wears a black jacket, an undershirt of varying colors, and dark blue pants. Sometimes, he wears his Toy Story 2 outfit.

All Grown Up Edit

8 Years after the events of Toy Story 3, Andy's appearance changes a lot. His hair is shorter, he wears glasses, sports a beard, and is now 28 years old. His outfits change a lot, but he is mostly seen wearing a dark green long-sleeved shirt, a white undershirt, black trousers, and black dress shoes. Sometimes, he wears a white or blue dress shirt with a tie. After the time-skip, he begins wearing less fancy clothes. His new prominent outfit consists of a black long or short-sleeved shirt(sometimes a different color), white shorts, and black sneakers. On rare occasions he wears his Toy Story 3 outfit.

In the flashbacks at the beginning of Toy Story 4, Andy appears as a kid again, but a few years older. He is seen wearing a blue t-shirt with white sleeves and a darker blue border, blue jeans, and black converse sneakers. In a couple more flashbacks, he can be seen in other blue shirts: one with stripes, and another one that is similar to the shirt he wore in Toy Story 3. In another flashback, he wears the same outfit he wore at the end of Toy Story 3 and Advanced Education.

In the Dog-Daze of Summer series, Andy can be seen wearing the same blue and white t-shirt from Toy Story 4, as well as blue short jeans and a red and white pair of sneakers.

In the Senior Year series, Andy's main outfit consists of a navy blue hoodie with the Tri-County University logo on it, a white short-sleeved undershirt, blue jeans, and black converse sneakers.

In Toy Story, Andy receives a Buzz Lightyear action figure for his 6th birthday (6-year-old Andy), causing tension between Buzz and Woody, who has always prided himself on being Andy's favorite. He spent much more time with Buzz and grew to love him as much as Woody, but he still held a special place in his heart for Woody himself, as evidenced when both toys went missing for a time and he fears they would be left behind after he moved to a new house with his family, unknown to him Woody and Buzz are in Sid Phillip's house. Fortunately, he is able to find them as they are driving to their new house after he discovers that they were in the car the whole time (by that time, Woody and Buzz have put all tensions aside and become friends). Later that year during Christmas, he receives a puppy, though his bond with this new pet is never developed beyond his excitement about having one.

In Toy Story 2, four years after the events in Toy Story, Andy is now 10 years old and is seen only at the beginning and for a short while at the ending. However, during the short time he is in the movie, it is easy to tell that he still loves his toys very much and they still feel the same about him. While Woody is having a nightmare after his arm accidentally ripped while playing with Buzz, Andy notices his rip saying that he does not want to play with Woody anymore and drops him into the cards left on the floor by Rex and Mr. Potato Head which lead Woody to land into a trash can filled with severed hands, Woody sees this yelling Andy not to do it and the severed hands grabs him by the neck sinking him and Andy sadly says goodbye to Woody and closes the trash can ignoring Woody's pleads. At the end of the film, Andy is pleased to have five new toys, Jessie, Bullseye, and three Squeeze Toy Aliens, added into his collection and fix Woody's arm which has been fixed by the cleaner earlier and has been ripped open by Stinky Pete. Whenever Andy receives new toys, he always labels them with his name on the soles of their feet. For Bullseye's case, Andy prints each individual letter of his name on each of Bullseye's hoofs.

In Toy Story 3, seven years after the events in Toy Story 2, Andy is now 17 years old and preparing to go away to college, intending to put most of his toys in the attic (except for Woody, whom he initially plans to take with him). While he apparently hasn't played with them for some years ago, he still cares about them and is visibly upset when he can't find them anywhere. At the end of the film, due to Woody's interference, he decides to give them, other than Woody, to Bonnie, the daughter of a family friend, who he realizes will look after them. When she finds Woody in the box as well, Andy shows great reluctance to pass on his favorite toy, but ultimately relents, allowing them to stay together in an environment where they'll be loved and played with. He spends a while playing with Bonnie and the toys one last time before leaving for college.

Andy first appears in the episode "Sim Story", where Phineas and Ferb build a device that teleports their group, and everyone in their radius into the Sim World. Bonnie and her group just so happened to be in that radius, and ended up in that world too. Bonnie, Andy, and the other toys didn't really approve, so they tried whatever they could to get back in the real world.

While Bonnie Anderson and Mason Patzer, along with their toys, go with Andy Davis to his mother's house to help her move a carpet, when, unbeknownst to them, Sid Phillips is stalking them, recording footage of the toys coming to life, and showing it to the Government, who later show up at their house to try and take the toys away so they can experiment on the toys and eventually destroy them, and Bonnie and Mason, who found out on a prior occasion, are devastated by this. Their parents, not wanting them to be unhappy, decide to take the kids and move to Fredford Massachusetts to avoid the government. While Bonnie and Mason are attending Fredford High, Andy has been working on moving in to Fredford, and looking for a job. On his spare time, he would sometimes join Tom and co. at dinner and weekends, or hang out at the apartment. Near the end of the series, the toys are kidnaped by the Akatsuki, Andy helps the gang rescue them and put the Akatsuki behind bars.

In Toy Story 4, Andy makes a brief appearance at the beginning of the film during a flashback segment nine years before Toy Story 3. During a rainy night, Andy is first seen heading inside putting his toys on his bed before heading downstairs for dinner, and later, as Bo Peep was being given away, Woody considered going with her until Andy ran outside looking for him, making Woody realize just how much Andy needed him. He eventually finds him on the driveway. He is then seen in a few more flashbacks of him playing with his toys, and in another flashback of him giving his toys to Bonnie. He is also mentioned several times by Woody. 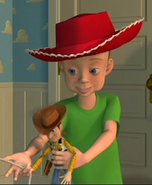 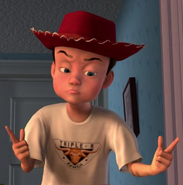 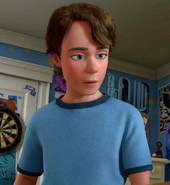 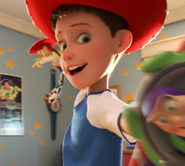 Add a photo to this gallery
Retrieved from "https://school-daze.fandom.com/wiki/Andy_Davis?oldid=6201"
Community content is available under CC-BY-SA unless otherwise noted.